Plant a tree in memory of Kasim
An environmentally-friendly option 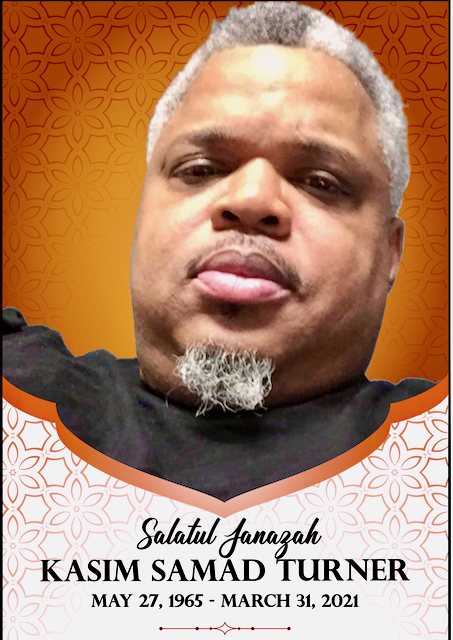 Kasim Samad Turner was born on May 27th, 1965, in Newark, New Jersey, to Mary Frances Murray and the late Abdur Rahman Sahib. Kasim departed this life on March 31, 2021.

Kasim was raised in East Orange, New Jersey, where he attended the East Orange School District. After his high school years, he began his journey as a tumbler by joining the Flip City Tumbling team that was based out of the East Orange YMCA and the North Ward Boys & Girls Club in Newark. He was chosen as a tumbler for the Metropolitan Opera House in New York, where they performed for several months.

Kasim was employed as a baker for a few years until he obtained his CDL and began driving buses. He developed a passion for music and started managing artists from his home, and eventually opened Madd-Bass Studio based in East Orange in the late ‘90s. Around 2001, he moved to a new location on Prospect Street in East Orange, where he's engineered thousands of artists over the past 20 years. Kasim was very well known in the music industry. Kasim began mentoring at-risk youth in East Orange, Newark, and South Orange/Maplewood. He even allowed some of those youth to intern at MaddBass Studio.

Kasim was full of life and energy and always had jokes. He was always the life of the party. He loved all of his grandchildren, and they affec-tionately called him "Pop Pop.” Kasim Samad will truly be loved and missed by everyone that came in contact with him. His legacy will live forever. He touched many lives.
Kasim is survived by his Beloved Mother: Mary Frances Murray; His four daughters: LaQuasha S. Shaw, Katina Y. Thelemaque (Louis Jr.), Terina Turner, Kaseema Turner; His son: Kasim Turner; His Grandchil-dren: Angel Figueroa Jr, Louis Thelemaque III, Avyanna Figueroa, Ayden Figueroa, Ky'zamir Zimmerman, Norie Thelemaque, Sanai Turner; His siblings: Wayne Turner, Abdullah Jihad, Salik Turner, Sharonda Turner, Marius Smith, Raheem Lockhart, Alisha Lockhart, Malik Rainey, Sahib Rainey, Samad Rainey, Rahim Handy, Rasul Turner, and a host of other relatives and friends.

Plant a tree in memory of Kasim by clicking here.
To send flowers to Kasim's family, please visit our floral store.

A service summary is not available

Plant a tree in memory of Kasim
An environmentally-friendly option

Plant a tree in memory of Kasim

1 tree planted in memory of Kasim

A Memorial Tree was planted for Kasim Samad Turner

Plant a tree in memory of Kasim